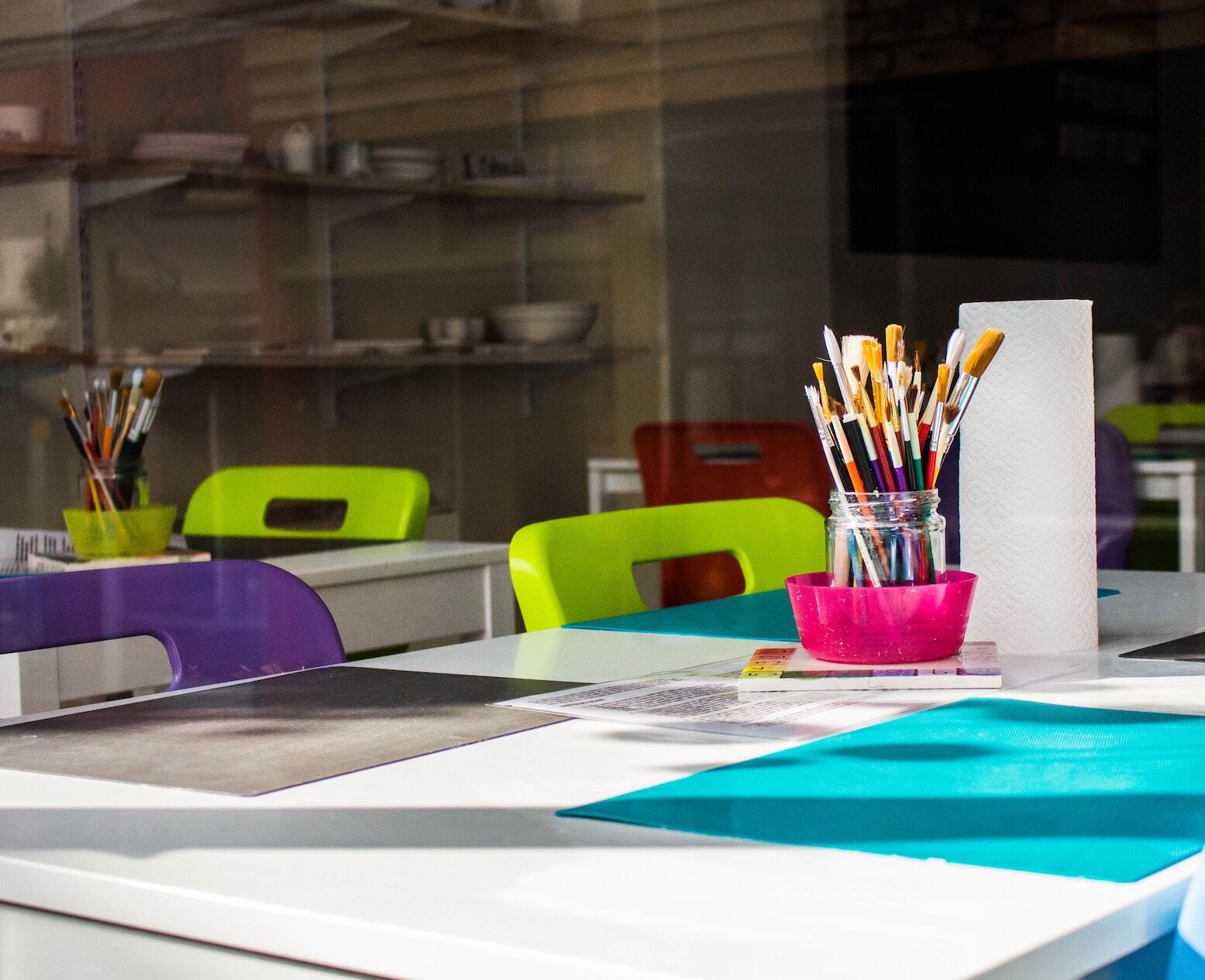 At a recent residential programme for MAT CEOs we were discussing different models for improving schools across a MAT, and how any chosen strategy needed to change and adapt at different points in a MAT’s growth.  I was reminded of the ‘Greiner Growth Model’, which I first used when I was a Strategy Partner at

At a recent residential programme for MAT CEOs we were discussing different models for improving schools across a MAT, and how any chosen strategy needed to change and adapt at different points in a MAT’s growth.  I was reminded of the ‘Greiner Growth Model’, which I first used when I was a Strategy Partner at PwC, and I’d like to share how this shows MAT leaders the 6 phases of growth they might go through, and some potential pitfalls that accompany them (which might sound familiar!)..

The 6 phases of growth (and the crises that accompany them!)

Professor Greiner observed that in fast growing organisations, the management practices that were ideal in one phase of growth may eventually bring on a crisis as the organisation outgrows them.  The resolution of this crisis creates a new model of management. 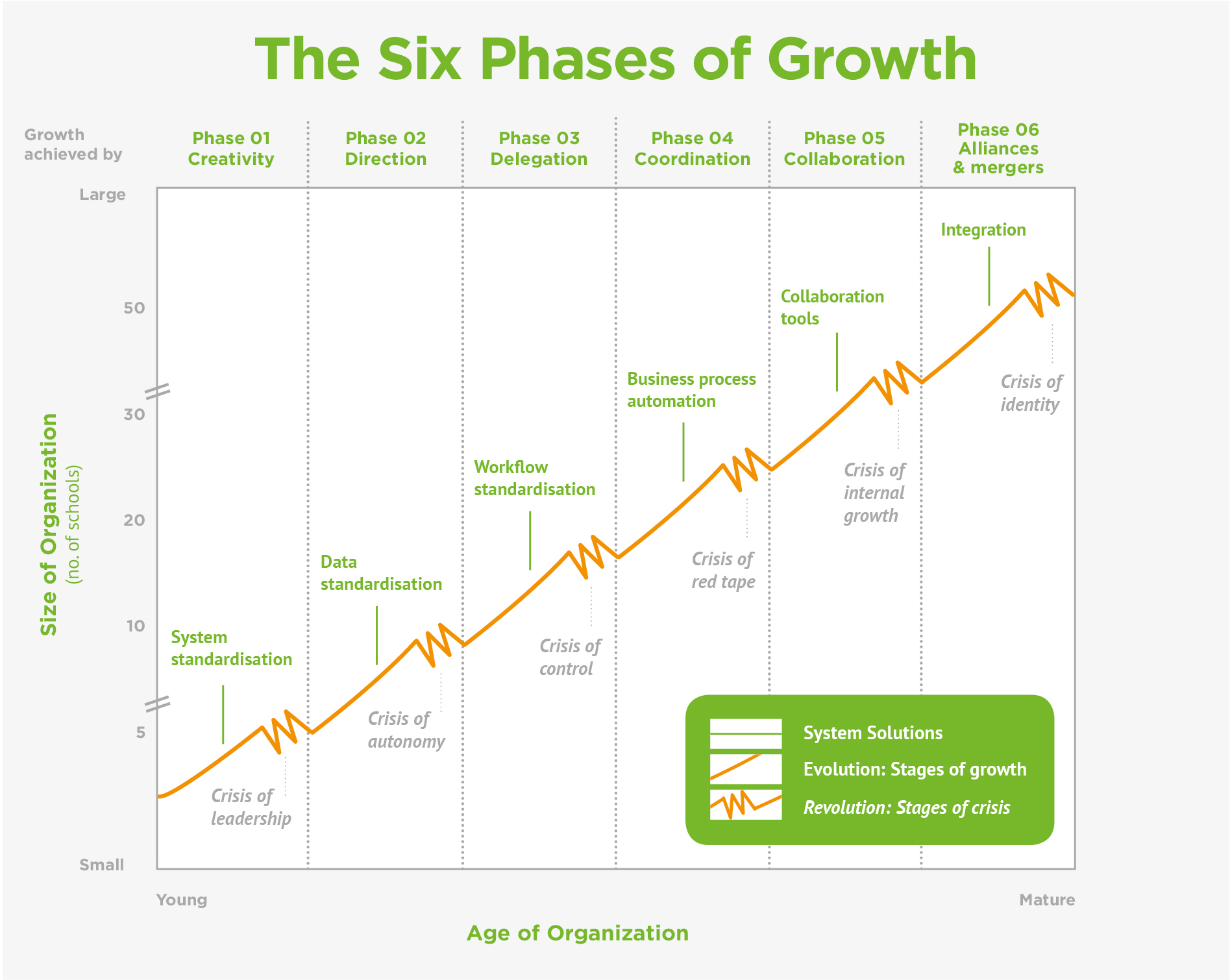 How the growth model applies to MATs

If the pace with which fast growth leads to a crisis is, as Greiner said, a factor of speed of change in a sector, there can be few sectors that have seen such dramatic changes as Multi-Academy Trusts.  In contrast to schools, which have been with us for hundreds of years, MATs were only created in line with the sponsored academies programme 16 years ago, and the number of MATs has risen 88% in the past year alone. MATs are growing not just in number but size, with the number of MATs with over 10 schools growing by 68% in the same period.

MATs are put through rigorous stress tests by DFE before they can become sponsors, and at various stages of growth; but even if the management approaches were right at those points, the Greiner model predicts, and therefore helps us to manage, the points at which those practices are outgrown.

The size of a MAT is only one factor to consider when choosing how to manage.  The appropriate management style will also relate to other aspects of complexity, such as the chosen approach to curriculum, pedagogy and school improvement, the geographical spread, the difference in context of different Academies, and whether the MAT covers a mix of Special schools and a range of phases of education, or just one phase.

In a small and young MAT growth can be achieved through ‘creativity’.  In this phase, which might consist of a single Executive Head / CEO in charge of  up to 4 schools, there are few formal management activities at the MAT HQ level, and head office communications are frequent and informal.  The small senior leadership team are collectively driven by their belief in the MAT, and its mission for students.  However, as the MAT grows, it becomes too large for such informal ways of working: it cannot provide adequate reports to the Board on finances, and it needs to be able to take on new schools which were not part of the original discussions about mission.  The founding Headteacher-turned-CEO may or may not have the appetite for more formal management. Sadly I have come across many MATs that have allowed the early warning signs to develop into a full blown crisis of leadership before they have taken action.

The Greiner Growth model would suggest that a MAT of anywhere from 3-15 schools may be well served by growth through ‘direction’.  At this point the MAT puts in place functional structures, with specialised IT, HR, Finance and other roles.  Proper accounting systems, budgets, common work standards, and formal communications are needed. The Growth model suggests that it is possible for a MAT of this size to be led from the top, with Heads of School and Executive Heads focused on running individual schools.  Professional teaching communities, focused by subject and age range, would set standards and make sure they were being applied across the MAT.

However, with further growth, the MAT needs to create ‘clusters’ of schools which can work together, and potentially also Regional structures.  At this stage, the Growth Model predicts a growing tension between the clusters/ Regions and HQ, and the new directive approach may begin to fail.  Regional leaders of sizeable groups of schools may feel restricted by the central hierarchy, believing that they know their local context better than staff in HQ, but can’t take initiative.  The Greiner model predicts that a crisis of autonomy will follow.  To move forwards, a new model of delegation will be needed, but it may be hard for the leaders who rescued the organisation from its early chaotic struggles to give up their directive style, and equally hard for Regional/ hub leaders to take that responsibility off the CEO.

This leads us to MATs with a mix of Regional and Hub structures, making use of increased levels of ‘delegation’.  These decentralised structures motivate Regional and hub leaders to respond to local needs, and work with middle leaders to push forward subject excellence and other solutions.  The role of the HQ is to manage by exception, using reports from the field. Communications to staff would more frequently be from the region/ hub than from HQ. The professional subject (and other) communities would continue to meet nationally as well as regionally, but the role of deciding how to implement the practices emerging from these communities would be devolved to the region, cluster or schools.

The very wide size band for this phase relates to earlier comments about the many other factors that affect complexity, although this tends to emerge from ~7 schools.  It is not certain to me that a large MAT necessarily needs to outgrow this phase, but this delegative management style will in turn face challenges. Sizeable Regions, hubs and schools enjoying greater autonomy will start to run their own shows, resisting HQ requirements for reporting or interventions.  A crisis of control may emerge, which if not addressed will lead to those regions breaking away from the MAT entirely.  Of course, this may be a reasonable outcome, but a pro-active HQ will at least want to be aware of the alternative options.  Whilst there may be a temptation for the MAT HQ to try to regain control and re-centralise management, this will usually fail due to the vast scope of operations involved at this stage of growth.  Instead, what is needed at this point is for the MAT to shift its management style to co-ordination.

A very large MAT managing through ‘co-ordination’ would focus the HQ on leading formal planning procedures, and allocating budgets carefully based on clear business cases.  The MAT HQ would retain some technical functions, such as data processing.  Many other operations would be decentralised to ‘Territories’, that is groups of Regions.  Consider that by this stage, each region might be the size of many of today’s medium-sized MATs.  The HQ would still retain an oversight function, but would be unlikely to intervene directly, as by this point, individual Territories should have sufficient capacity.  As with Stage 3, it is unclear if a MAT would necessarily outgrow this phase, but the model suggests that the signs it is failing will be when the formal systems for planning and investment across HQ, Territories and Regions create a crisis of red tape, alongside growing mistrust between HQ , Territories, Regional leaders and local teams.

A MAT which was so large that it outgrew co-ordination should focus on growth through ‘collaboration’, the preferred style of some of the world’s largest organisations.  The HQ would focus on setting behaviours, social role modelling, and interpersonal interaction, and would apply very few formal coordinating systems.  HQ would act through consultation, not direction. A matrix of Territories and professional functions would help to maximise the benefits of people with the same skills collaborating, whilst allowing for geographical responsiveness.  Simplified control systems would use real-time information about a few things that really matter, to inform daily decisions. Frequent conferences of senior leaders (territorial and functional) across the MAT would address problems, and CDP funded by HQ will focus on teamwork and conflict resolution (territories and regions would have devolved budgets for other forms of CPD such as subject specialisms).  Experimentation and innovation will be fostered and encouraged.

The main limit on MATs moving beyond this phase is likely to be a constraint on the number of Academies which find the MAT to be a good fit, leading to a crisis of growth.  In fact, this constraint may come up at any of the earlier stages, and lead to a final type of growth, through mergers and alliances.

Stage 6: Mergers and alliances (any size) – a crisis of alignment

MATs may find themselves considering mergers and alliances at any stage of growth.  There will be two main scenarios: either because a highly performing MAT is asked to take on all the Academies in a low performing MAT (for financial , educational, or both reasons) ; or because a MAT has identified a need to grow further, in order to access the benefits of greater size, but cannot do so through taking on individual schools – perhaps because there are none in a suitable location that fit the MAT’s values and focus.  At this stage, MATs will consider growth through mergers and alliances.  There have been relatively few examples of the second ‘voluntary’ scenario to date, due to the complexity of MAT Boards deciding to merge unless they are forced to.  It is likely that in this scenario, as well as full mergers, other models will emerge, such as groups of MATs sharing services, or ‘reversible’ decisions to create a merged MAT which continue to allow separation in future if this does not have the benefits they wanted.

If the right steps are not taken before and after merger there can be a crisis of alignment.  There there will be particular challenges if one MAT is in a different phase of management style than the other. For example, a MAT growing through ‘Direction’ merging one growing through ‘Creativity’ would need to be clear about the tighter expectations.  A ‘Collaborative’ MAT merging with a ‘Directive’ one might find that the Directive MAT can continue to operate in a semi-autonomous fashion for a while; but there is a risk that it never feels fully part of the family. The act of merging may trigger a need to enter a new phase of growth with a different management style.  The MATs’ respective approaches to topics such as standardisation, and choice of curriculum, will be important factors.

Above all, it is vital that the new identity is shared and owned not only by staff, but by pupils and parents.